This year I remained fairly stable in which beauty boxes I’ve tried. If you missed the 2018 developments check out: Battle of the Beauty Boxes – Conclusions from the 2018 Unboxing and Reviews on Birchbox, Glossybox, Look Fantastic and Cohorted

I still remain subscribed to Glossybox, Look Fantastic and Cohorted. However! My favourite beauty box has changed from Glossybox (which held the crown in 2017 and 2018) to Cohorted! Despite the fact that Cohorted increased its price this year from £35 to £40 a month, it was actually worth it.

All boxes were good value for money, as in any year before and although there weren’t any specifically dissapointing boxes there were a lot of mehs. Cohorted was the only box that kept me constantly excited, month after month, and that’s the point of a beauty box. Glossybox seemed to go down from being balanced between high and low end to containing mainly cheaper products. Look Fantastic has also gone down from last year as it still remains in my head as the “samples” box. Of course it doesn’t always and often contain samples but it is the box that repeatedly contains smaller size products.

If all you wanted to take from this post is which beauty box to subscribe to then the answer is very easy – Cohorted if you can afford it or Glossybox if you are on a budget. Glossybox is the cheapest by far and it is also the only box that gives you the option to earn money back from answering surveys on the products contained each month (they don’t take long, 2-3 minutes) and then being able to spend the money on LookFantastic.com. You can earn as little as £2.25 per monthly box or as much as £6.75 for their advent calendar. Nevertheless, every little helps and this means that essentially the box is £2.25 cheaper than the stated price (essentially means that postage is free).

You can find a diagram to help you decide which beauty box is best for you here. 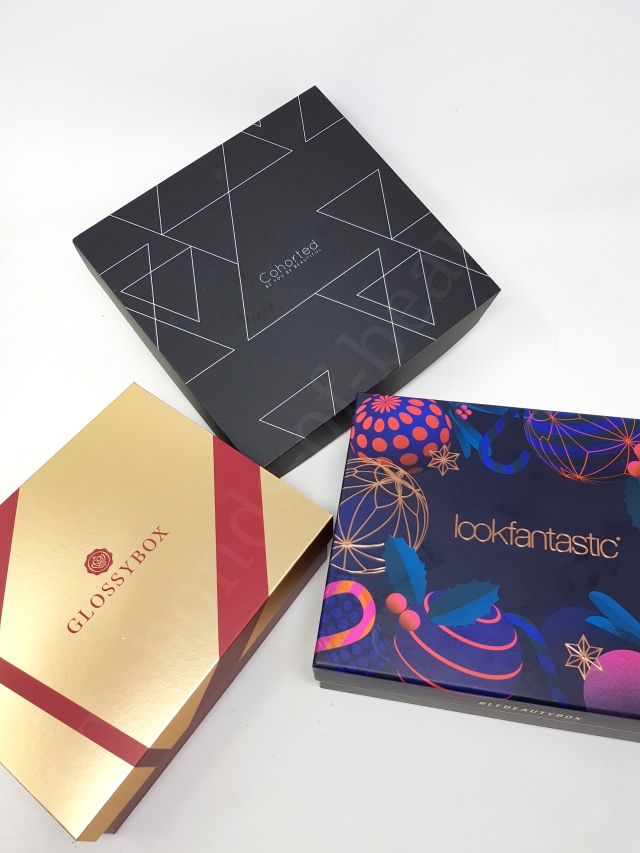 Let’s get into the actual details.

If you read any of my monthly beauty box reviews, you would have noticed that I give them two scores every time. The first one is “Initial box score, in terms of products and first feelings”. This is the score that represents how I initially felt when I opened the box, aka the wow factor, before I tested any of the products. It is usually based on a few things, like the box design and theme and if the products contained fit them or where exciting to receive.

I don’t ever remember a box not being beautiful or the theme not being interesting but the one thing that beauty boxes tend to fail a lot at, is that fact that the products contained don’t often match the theme and design of the box. It’s a very simple thing and yet it is has also been one of the biggest downfalls of beauty boxes this year too.

The other score I give the boxes is the “Overall box score after product testing (a sum of product scores)”. As the name suggests, this is a sum of the scores of all products contained. It’s actually very interesting to compare the initial reaction to actual product quality if nothing else, to check if my initial “judging” was founded or not and if the actual experience of the beauty box is good. Most of the time, my initial box score was close to the product testing score which is great. Overall though, my initial box score is slightly higher than the product testing score which is normal and acceptable.

In previous years, it’s been rare for my initial score to be lower than the actual product testing score but somehow this year, it was quite common! For some reason the boxes didn’t excite me much, maybe because I’ve been doing this for years and the standard for the wow factor has gone even higher.

There are a lot of other conclusions that can be drawn as well, but before we get to them here’s all the scores (out of 10) from January to December 2019 for Glossybox, Look Fantastic and Cohorted.

The Glossybox initial score dropped to 7 from 8.6 in 2018, for Look Fantastic it dropped from 8.3 to 7.1 whereas for Cohorted it increased significantly from 8.3 to 8.8. Cohorted definetely takes the excitement factor award this year.

Glossybox and Look Fantastic were very similar in excitement and quality of products contained, which is why Look Fantastic is actually not worth the higher price. 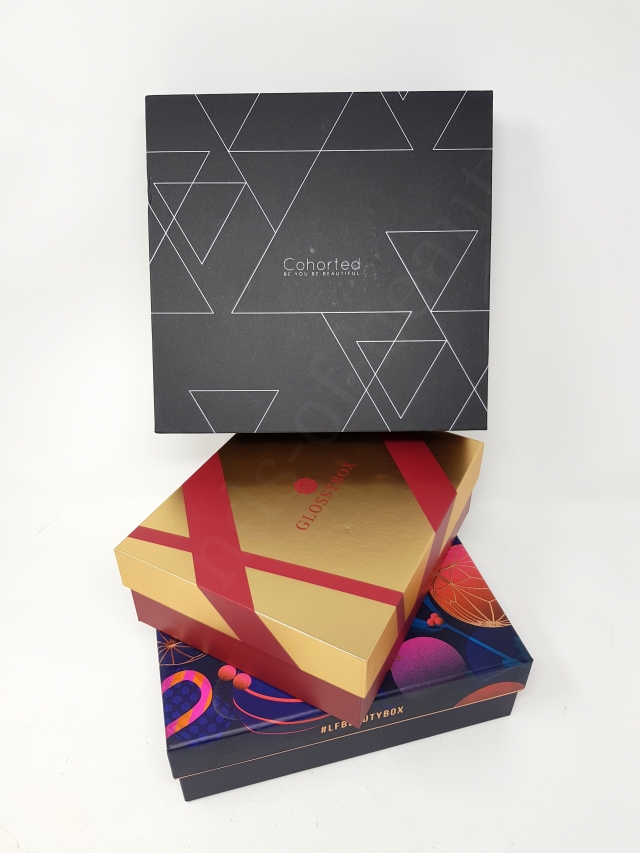 Let’s see how these beauty boxes changed the past 3 years:

Unfortunately, Look Fantastic has gone down significantly this year whereas Glossybox made smaller losses and Cohorted some gains. However, given that Cohorted has gone almost back to the same scores as in 2017, it does put into question whether the extra £5 a month really made a difference (was £35 in 2017-2018 and £40 in 2019).

If you compared the prices, you’d almost expect Glossybox to be 1/4 less as good as Cohorted (yes, I know it doesn’t really work that way but you know what I mean), but it is not! The Glossybox average scores are much nearer the Cohorted scores than they should, for its price, and it truly shows how great Glossybox given it’s price.

It’s very hard to say which was the least exciting beauty box of 2019 as there were multiple 6s! The lowest ever product testing score was 5.4 for Glossybox June and the highest was 8.4 for Glossybox December. This nicely shows how up and down Glossybox was this year, sometimes great sometimes not so much and it seems to have lost the stability it had in 2017 and 2018. 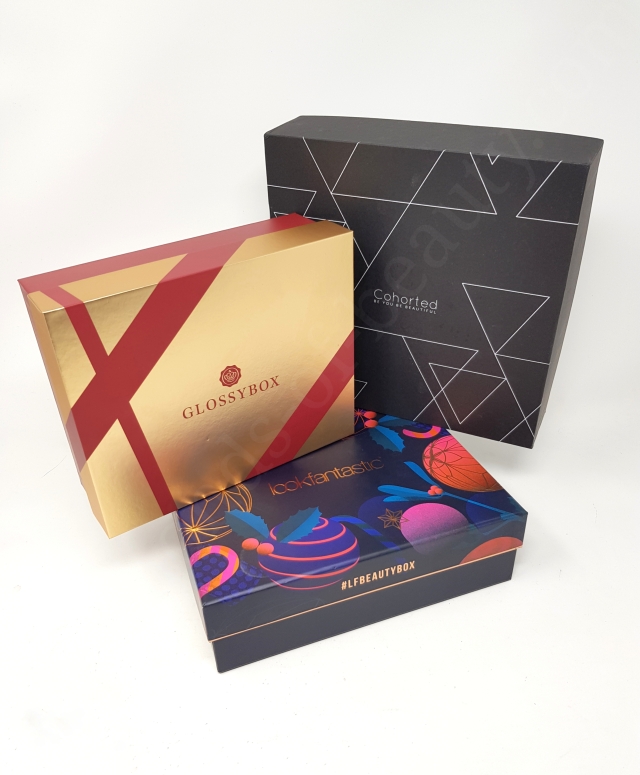 Overall the best beauty boxes this year were, in order of best to worst:

It’s been an amazing year of beauty boxes and cosmetics in general, and it’s been lovely to share all these unboxing experiences and reviews with you. I am really looking forward to next year’s boxes and I’m very curious to see how these boxes change  next year.

To subscribe to Cohorted and get £5 off your first box click here and use the code: 6z8sdk 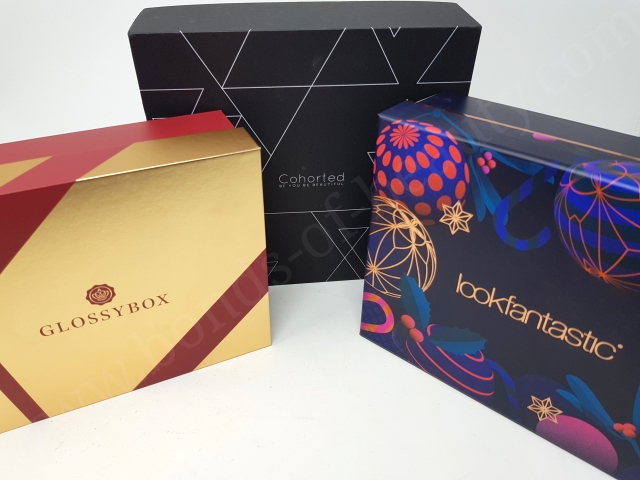 For general Subscription Box reviews see my: Birchbox, Glossybox, Look Fantastic and Cohorted general review posts. For help on how to choose the right subscription box for you check out “Which Subscription Beauty Box is right for you?”. You can also see pictures from all beauty boxes on my Pinterest beauty box board.

I am not affiliated with any company or brand. These are my views and experiences.
Beauty is a very personal thing, we all have different skin, requirements and biological build which can influence things. What worked for me might not work for you and vice versa. Have you ever tried these products? Did they work for you? Let me know your experiences below!

This article is from www.bonds-of-beauty.com. Click below to find me on:

1 responses to Battle of the Beauty Boxes – Conclusions from the 2019 Unboxing and Reviews on Glossybox, Look Fantastic and Cohorted